Pros and Cons of GMOs 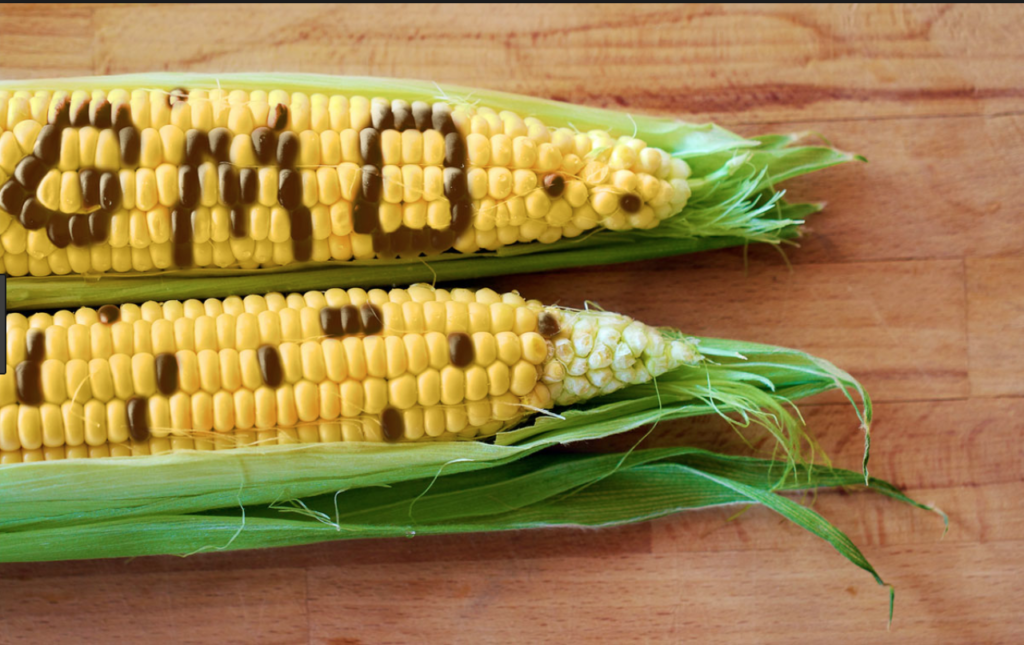 When you hear the infamous acronym, GMO, what comes to mind? Often, GMOs invoke images of greedy multi-nationals spawning abnormally large cows or tomatoes, to mass produce and sell to the unsuspecting public at higher margins. But is preconception fair? What do you actually know about GMOs? Let’s find out..

If you are living in the United States and you’ve been eating food to survive, chances are you’ve  already had your fair share of GMOs, whether you know it or not. So what does this mean?

Organisms? While that may sound creepy, genetically modified foods are normally made from soy, corn, or other crops grown, by using sseeds with genetically engineered DNA.

According to the U.S. Department of Agriculture (USDA), these seeds are used to plant more than 90 percent of corn, soybeans, and cotton grown in the United States. And if Americans are what they eat, then we are corn and soy. In fact, a study testing hair follicles found that up to 70% of the carbon its made from comes from corn carbon.

So, unless you’ve been very, very consciously avoid them, it’s very doubtful that you haven’t been consuming your share of GMOs or GM foods.

Should you be worried?

Not necessarily, some people actually believe GM foods are safe, healthy, and sustainable.

There is a common misconception is that any animal or plant considered to be outside the realm of our reference for “natural” is a GMO.

However, the scientific community and the U.S. Food and Drug Administration (FDA) use a stricter definition for a GMO: an animal or plant that has been created through genetic engineering. Under this definition GMOs do not include plants or animals made by selective breeding, or animals modified by being given hormone supplements or antibiotics. In fact, we do not currently eat any meat products considered to be GMOs, although farm animals may be fed a genetically modified crop.

It’s worth noting that pictures of extremely large vegetables are probably not GMOs at all; an unusually large vegetable would more likely be created through less controversial methods of selective breeding or nutrient supplements, not genetic engineering.

How are GMOs made? 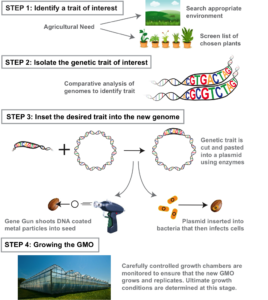 All of products of genetic engineering are created using the exact same steps:

The details of these technologies are publicly available, for all comapnies. You can see Monsanto’s process in the diagram. Other major companies such as Syngenta, BASF, Dow, Bayer, and Du Pont use similar methods.

You won’t be surprised to find that the primary objective of the majority of genetic engineering performed on food is to increase crop yield and/or to improve the nutrient value in animal feed. Pictures of extremely large vegetables used to support the “Franken-food” image of GMOs are probably not GMOs at all; an unusually large vegetable would more likely be created through less controversial methods of selective breeding or nutrient supplements, not genetic engineering.

Scientists genetically engineer seeds for many reasons. For example, they sometimes make changes designed to increase a plant’s:

They also engineer seeds to give GM foods stronger colors, increase their shelf life, or eliminate seeds. That’s why we can buy seedless watermelons and grapes. Some GM foods also have been engineered to have higher levels of specific nutrients, such as protein, calcium, or folate.

Proponents of GM food contend that genetic engineering can help us find sustainable ways to feed people. Specifically, in countries that lack access to nutrient-rich foods. The heartiness of some GM crops makes it so they can grow in marginal environments. The longer shelf life of some GM foods allows them to be shipped to remote areas.

On the other hand, some people wonder if GM foods are safe and healthy to eat. Genetic engineering is a relatively new development. As a result, research on the long-term health effects of GM foods is limited.

GM foods have to meet the same safety requirements as foods grown from non-GM seeds. But critics suggest there’s more to be concerned about. Some people worry that GM foods may be linked to allergies, antibiotic resistance, or cancer. Others suggest these concerns are unfounded. Here’s what the research says.

People may be allergic

Food allergies are a growing problem in the United States. According to the Centers for Disease Control and Prevention (CDC)Trusted Source, food allergies in children under 18 years of age have increased; from 3.4 percent between 1997 and 1999 to 5.1 percent between 2009 and 2011.

Some people believe that spike is linked to GM foods. But there’s no evidence that GM foods in general are more likely to trigger allergic reactions than non-GM foods, according to another study from Harvard University.

GMOs may contribute to antibiotic resistance

For years, people have been speculating that GM plants could spread antibiotic-resistant diseases to humans: “Opponents fear bacteria inside the guts of animals fed the GM potato – which can cause human diseases – may develop resistance to antibiotics.”

In an issue of the Critical Reviews in Food Science and Nutrition, the review Health Risks of Genetically Modified Food stated: “An area of concern focuses on the possibility that antibiotic resistance genes used as markers in transgenic crops may be horizontally transferred to pathogenic gut bacteria, thereby reducing the effectiveness of antimicrobial therapy.”

Generally, it is groups that actively work against deregulation of genetically engineered crops have been making such claims for years. However, if there is a link between these GM foods and rising rates of antibiotic resistant bacteria, it has not been confirmed. More research conclusive evidence is needed.

GMOS have been linked to Cancer

Some people claim that altering the DNA of a plant or animal has a significant effect on a person’s chances of developing cancer. While this may seem to have logic behind it, the current research on the health risks of GMOs is inconclusive. In other words, researchers cannot confirm whether or not GMOs increase cancer risks. According to the American Cancer Society, more research is still needed to assess the potential long-term health effects of GM foods. But, while there may not be sufficient evidence to conclude that GMOs and GM foods can, in fact, increase cancer risk, eating more fruits and vegetables — regardless of how they are grown — is more proven beneficial than avoiding any potential risks of pesticides used on fruits and vegetables.

Studies are restricted by organizations in control of GMOs

Notice the trend that there never seems to be enough evidence to prove the harmful effects of GMOs? Well, that could be related to the fact that user concurrence with half of the leading manufacturers of GMO seeds probit  autonomous research of the finished good. Because the seeds are seen as the property of the corporation, even unintentional growing of a GMO crop can cause in the necessity to reimburse the company. Shady? Yes.

Applying pesticides to crop fields is sorta like using antibiotics on one’s body. By using pesticides to rid crops of pesky critters, a small number of them have a tendency of surviving. This results in the following generation becoming resilient to chemicals prompting the use of stronger ones. By using a stronger chemical, the insects become even more resilient. Continue this cycle for years and eventually you get super bugs, highly resistance even the strongest pesticides, with even bigger appetites. How can you tell if you’re buying GM food?

How do I know which foods are genetically modified?

If you decide to avoid GM foods, look for products that are certified organic, which are grown without the use of GMOs. Foods that carry the United States Department of Agriculture’s 100 percent organic seal usually don’t contain GMO ingredients, but the agency does not test products to verify this. The Non-GMO Project Verified seal is even more reliable because the organization verifies that the product not have more than 0.9 percent genetically modified ingredients.

Non-GMO labels can be found on foods that are never genetically modified, such as canned beans and vegetables, chicken, eggs, oatmeal, quinoa, and tuna. Why? Sometimes it is just marketing, but in other cases there’s a reason. For instance, when you see the Non-GMO Project Verified seal on eggs or chicken, it means there are no genetically modified ingredients in the animals’ feed.

Corn and soy are usually GMO

You can that any product made with these three ingredients are genetically modified unless the label says otherwise:

A GMO variety of apple that doesn’t brown has gone through Food and Drug Administration’s voluntary safety consultation process and the FDA has approved genetically modified salmon, but neither   product is on the market yet.

Much of the sugar in America’s sugar bowls and processed foods—not only baked goods, soda, and sweets, but also foods such as bread, cereal, soups, and yogurt—come from sugar beets and 99 percent of that crop is genetically modified. High fructose corn syrup is often genetically modified too, as is the artificial sweetener aspartame. Agave, cane sugar, molasses, and turbinado sugar, however, are never genetically modified.

GMOs can be random 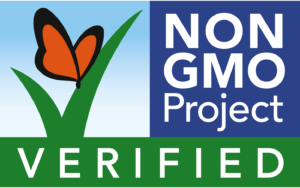 The Non-GMO Project is a mission-driven nonprofit organization dedicated to building and protecting a non-GMO food supply. They do this through consumer education and outreach programs; marketing support provided to Non-GMO Project Verified brands; and training resources and merchandising materials provided to retailers.

However, some geneticists claims that the labels are more misleading consumers into buying more expensive products that don’t really mean anything. For example, University of California Institute for Food and Agricultural Literacy founding director, Professor Pamela Ronald, who believes:

“That label is a nice marketing advantage because you can mark up your product as ‘non-GMO’ …. This label is on 50,000 products, most of which have no counterparts that are genetically engineered. In about eight years, it has documented US$26 billion in annual sales.

“What is very disappointing is not only are consumers paying more for something that is meaningless, but also many farmers are now moving to so-called non-GMO crops and going back to older technologies where they are spraying older and more toxic compounds.”