The Festival of Lights is a time of lighting the menorah, spinning the dreidal and commemorating the rededication of the Second Temple in Jerusalem. However, at Small Axe Peppers, we were thinking that perhaps Hanukkah could add a little extra something, something.

Not that Hanukkah isn’t perfect as it is, but perhaps it’s not only the menorah that needs a little spark.

That’s right, it’s time those latkes or other delicious Jewish delicacies get a little fire of their own. Of course, we’re talking about some heat provided from a hot sauce that fully respects the Jewish law.

Yes, we are talking about kosher hot sauce.

What is Kosher Hot Sauce?

Kosher Hot Sauce – (n) is any seasoning, or salsa made from chili peppers and other ingredients that complies with the strict dietary standards of traditional Jewish law. 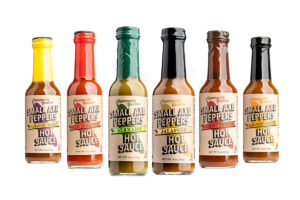 What does Kosher actually mean?

In order for us to ensure that all of our products are, in fact, kosher, we did a little studying up on it ourselves.

The English word “kosher” is originally derived from the Hebrew root “kashér,” which means to be pure or proper.

Kosher dietary laws were established to provide a rigid framework of rules which not only outline the foods that are allowed or forbidden but also mandate how such foods must be produced, prepared and processed prior to consumption.

One of the most significant kosher dietary guidelines bans certain food pairings — particularly that of meat and dairy.

In fact, according to kosher tradition, no meats can even be served or eaten at the same meal as a single dairy product.

Furthermore, all the cooking utensils used to process and clean meat and dairy must be kept separate. That means even down to the sinks in which they’re washed.

Looking for a Kosher Hot Sauce?

Look no further. All Small Axe Peppers’ product respect all the standards required to constitute a fully kosher hot sauce. So order up and prepare those latkes, because things are about to get spicy this Hanukkah.