Hottest Hot Sauces In The World

Hottest Hot Sauces In The World

Mankind has been heating up its meals with hot sauce for generations. In fact, experts agree that hot sauce goes back as far as Mayan times.  However, just a mixture of peppers and water, the first sauces were far simpler and would be unrecognizable by today’s standards.

The contemporary bottle of hot sauce didn’t come until years later, however it was still quite some time ago. The first commercially available bottled sauces in America appeared in Massachusetts all the way back in 1807.

However, while the bottled sauces would certainly resemble the contemporary bottle of hot sauce, their flavor would be mild by today’s standards. It wasn’t until much later, when people began breeding pepper plants that hot sauce started to get really spicy. By the late 1980s, mankind had descended into a full blown arms race for extreme chili breeding. Unsurprisingly, this has resulted in the birth of dangerously spicy peppers, such as the Carolina Reaper and the infamous Pepper X, and even spicier hot sauces.

We’re talking sauces made with peppers so unnaturally far off the Scoville charts, that they need warning labels just to be put on shelves.

As mentioned, the breeding of these insanely spicy peppers has naturally spilled over into the creation of some terrifyingly spicy concoctions. And when we say terrifying, we mean it. That’s right, these sauces are nothing to mess around with. Seriously, the creators of some of the world’s hottest hot sauces are really pushing the limits. So venture in at your own risk, but don’t say we didn’t warn you.

Check below for the 10 hottest hot sauces you can buy:

If you’re here, you’ve probably watched “Hot Ones” before. You know that last sauce Sean Evans and his guest always taste? This is it—and it measures 2 million on the Scoville Scale. The hottest sauce on Hot Ones, the show with hot questions and even hotter wings! The Last Dab XXX combines fierce heat with intense flavor. Ginger and mustard seed give it zippy notes up front, while dried spices like turmeric and cumin layer in an earthy base. Made with three varieties of PEPPER X, the world’s hottest, this sauce is a true burner and smokes out celebrity guests and fans alike!

PuckerButt Pepper Company rates the heat of Reaper Squeezin’s “painfully hot.” In reality, it contains up to 2.2 Million Scoville heat units. To give you some perspective, the average bottle of Tabasco has about 50,0000 Scoville heat units.  Do with that what you will. The pepper to vinegar ratio in this hot sauce is an unparalleled 93% pepper to 7% vinegar. Made with the original Carolina Reaper as created by Smokin’ Ed Currie it is closest you will ever get to eating a fresh Reaper.

8) Hottest Sauce in the Universe, The 2nd Dimension 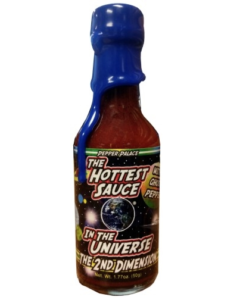 While it’s not quite the hottest sauce in the universe, it’s fairly close. The people at Pepper Palace make each batch with 40 pounds of ghost peppers, clocking in at 3.5 million Scoville units. That makes it 3 times hotter than the infamous ghost pepper. Better watch out, otherwise this sauce will send you back a dimension or two.

7) Z Nothing Beyond Extremely Hot Sauce 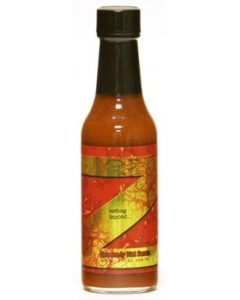 Z… Nothing Beyond Hot Sauce is a tasty concoction that certainly brings the heat.  Ok, ok.. it won’t kill you, but after trying it, you might wish it did! Made with 4 million Scoville unit pepper extract, this sauce should only be used with extreme caution! An award winning extract sauce that definitely brings fire to the delightful flavor. 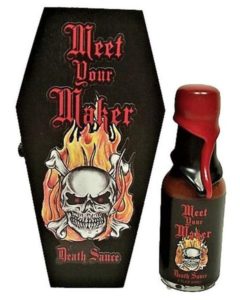 The packaging and branding for this one says it all.  I mean, just look at the name. And yes, it’s a product that comes in a coffin… so… you know…there’s that. Inside, you’ll find ghost peppers three ways: fresh, ground, and extracted. The creators of this one weren’t playing games so taste at your own risk. 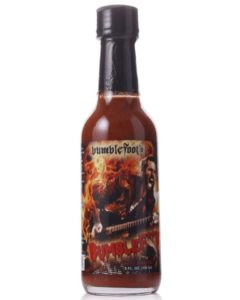 Starts with a tingle on the lips… Then the taste of tropical fruit & ginger… Heat rises in the back of the mouth… Whole body heats up, deep breaths, pacing slowly, heat keeps building, uh oh… you’ve been BUMBLEF**KED!!

The habanero chilis in this are smack-you-in-the-face hot at 6 million Scoville. But it’s not just heat,  it contains honey mustard, Caribbean fruits, ginger and ginseng round out the taste. 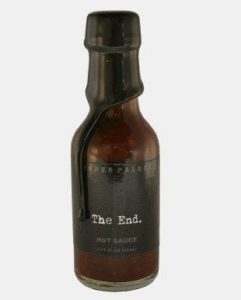 The story of “The End”: “In the beginning, you walk into a Pepper Palace and see The End. The End calls for you, taunts you. It says free sample, it lulls you into a false sense of bravado. Your inner voice reasons with you, “it can’t be that hot, can it?”“I’ve had hot stuff before,” “How bad can it be?” Then you make your first and last mistake. You try a drop of The End. The searing pain felt across your tongue brings tears to your eyes. You cry out for water. The panic sets in. How do I make it stop?!? Why did I do that? I should have listened to the warnings! You swear never again! 5 minutes, 10 minutes, 30 minutes later… The End still hasn’t ended. (The End still isn’t here.) R.I.P. your taste buds…” 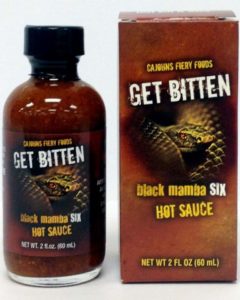 The Mamba 6 is made with a select blend of Chocolate Habaneros, Vinegar and 6 million extract; making this Black Mamba sauce even more evil than its predecessor. Mamba 6’s mission is to bring pain, with a never ending wave of venomous fire! Go ahead, get bitten by this sauce!

CAUTION: Avoid contact with eyes and sensitive areas. Keep away from children and pets! USE RESPONSIBLY!!! 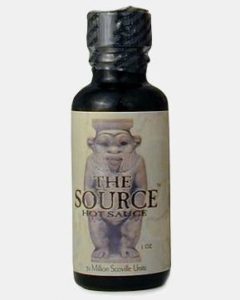 The Source Hot Sauce Extract is the second hottest extract on earth. That’s right, you must treat this product with respect and only use as a food additive. With an unimaginable 7.1 million Scoville Units, this product is a must for every chili head’s shelf. It comes in a 1 ounce bottle but you could add heat to 100 pots of chili in 1 ounce. Keep out of reach of children. Consume one drop at a time with extreme caution. Must be 21 years of age or older to purchase. Yeah, this sauce is serious!

(We weren’t joking about the warning labels, these sauces can really be dangerous.)

So then, what is the hottest hot sauce on the market? The most extreme heat you can buy?

The hottest hot sauce in the world is called Mad Dog 357 Plutonium No. 9 and comes in at 9 million Scoville Hotness Units (SHUs).

This pepper extract is one of the hottest and purest in the entire world. If you just want a little heat in your food, this is NOT the extract for you. This little bottle is for the true aficionado of heat, the one who wants to test the limits, to see how explosive pepper heat can be. Blow something up at supper tonight. But use caution because this sauce is almost lethally spicy.

Made with the infamous Ghost Pepper, this sauce is not for the faint of heart. Sure, it isn’t going to burn through your soul like the Mad Dog 357 but that doesn’t mean it doesn’t have a kick. In fact, it could be a great place to start testing your limits before trying some of the disgustingly spicy sauces listed above. So go ahead, give our Ghost Pepper Sauce a try: