What are food additives?

Food additives are substances added to food to preserve flavor or enhance its taste, appearance, or other qualities. Some additives have been used for centuries; for example, preserving food by pickling (with vinegar), salting, as with bacon, preserving sweets or using sulfur dioxide as with wines.

Food additives have been used for centuries to improve and preserve the taste, texture, nutrition and appearance of food. Food additives and preservatives are used in today’s food supply to prevent foodborne illness, enable the transportation of food to areas that otherwise wouldn’t be possible, and for the efficient manufacture of products to consistently meet the established quality standards from batch to batch.

The U.S. Food and Drug Administration evaluates the safety of food additives and determines how they may be used in the food supply. If an additive is approved, the FDA issues regulations that may include the types of foods in which it can be used, the maximum amounts to be used and how it should be identified on food labels.

The FDA maintains a database of nearly 4,000 ingredients, entitled “Substances Added to Food.”

Additives and Preservatives: What’s the difference?

Are all additives also preservatives? Or are all preservatives also additives? Looks like we’re dealing with another case of complex geometry – squares and rectangles, people.

So what’s the difference between the two? 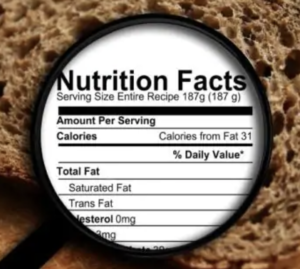 Food preservatives are essentially additives used in food processing which limit the growth of dangerous microbes. Even though you can’t see them, thousands of microscopic germs are running around on practically every surface we touch. While some of these germs pose absolutely no threat, others may cause sickness.

Unlike preservatives, food additives are not intended to slow down the threat of microbes or fungus. So, what purpose do they serve? Most food manufacturers use additives in their products to either enhance the flavor, give it a more desirable appearance or to change its colour.

Ingredients that either maintain or control the acidity or alkalinity of foods are known as pH control agents. These may be added to alter the texture, taste or safety of a food. Citric acid, acetic acid and sodium citrate are widely used agents and often are found in gelatins, jams, ice cream and candies. Lactic acid is an acidity regulator used in cheese-making, and adipic acid can be found in bottled fruit-flavored drinks.

Anti-caking agents are added to powdered or granulated ingredients — such as powdered milks, egg mixes, sugar products, flours and baking mixes — to prevent lumping, caking or sticking. There are many agents to choose from, including calcium phosphates, silicon dioxide, silicates (calcium, aluminum and tricalcium) and stearic acid.

Leavening agents are incorporated into doughs and batters to increase the volume, shape and texture of baked goods. Common leavening agents include baking powder, beer, buttermilk, yeast, whey protein concentrate and yogurt. Used in a wide variety of sweet and savory products, these leavening agents can be found in cakes, cookies, breads, biscuits, scones, muffins and soda bread. 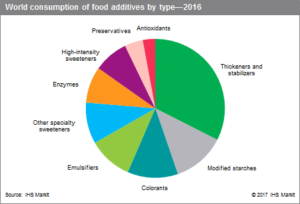 Emulsifiers are added to oil and water-based mixtures to help keep them blended together. Examples of emulsions in everyday foods include vinaigrette dressings, milk and mayonnaise. Lecithin from egg yolk and soybean are commonly used emulsifiers in the food supply. Others include diacetyl tartaric acid ester of monoglycerides (DATEM) and sodium stearyl lactylate. These often are used in commercial bread doughs, artificial whipped creams and dried, liquid or frozen egg whites.

These are widely used across many food product categories to improve stability and create a uniform texture by preventing emulsions from separating, ice crystals from forming and ingredients from settling. The starch-based category of thickeners includes arrowroot, corn, potato and tapioca. Vegetable gums include guar, locust bean and xanthan gum. Common protein-based thickeners include collagen, egg whites and gelatin. Alginic acid, alginates (sodium, potassium, calcium), agar-agar and carrageenan are polysaccharides derived from algae and seaweeds, while pectin is a polysaccharide originating from apple and citrus fruits.

Monosodium glutamate, or MSG, is a common food additive used to intensify and enhance the flavor of savory dishes. It’s found in a variety of processed foods like frozen dinners, salty snacks and canned soups. It’s also often added to foods at restaurants and fast food places.

MSG has been a subject of heated controversy since a 1969 study of mice found that large amounts caused harmful neurological effects and impaired growth and development.

That being said, some people do have a sensitivity to MSG and may experience symptoms like headaches, sweating and numbness after eating a large amount. In one study, 61 people who reported being MSG-sensitive were given either 5 grams of MSG or a placebo.

Interestingly, 36% experienced an adverse reaction to MSG while only 25% reported a reaction to the placebo, so MSG sensitivity may be a legitimate concern for some people. 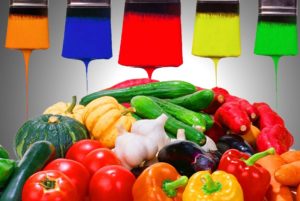 Artificial food coloring is used to brighten and improve the appearance of everything from candies to condiments.

In recent years, though, there have been many concerns about potential health effects. Specific food dyes like Blue 1, Red 40, Yellow 5 and Yellow 6 have been associated with allergic reactions in some people.

Artificial food coloring may promote hyperactivity in sensitive children and can cause allergic reactions. Red 3 has also been shown to increase the risk of thyroid tumors in animal studies.

Frequently found in processed meats, sodium nitrite acts as a preservative to prevent the growth of bacteria while also adding a salty flavor and reddish-pink color.

When exposed to high heat and in the presence of amino acids, nitrites can turn into nitrosamine, a compound that can have many negative effects on health.

Sodium nitrite is a common ingredient in processed meats that can be converted into a harmful compound called nitrosamine. A higher intake of nitrites and processed meats may be linked to a higher risk of several types of cancer.

Guar gum is a long-chain carbohydrate used to thicken and bind foods. It’s widely used in the food industry and can be found in ice cream, salad dressings, sauces and soups.

Guar gum is high in fiber and has been associated with a multitude of health benefits. For example, one study showed that it reduced symptoms of irritable bowel syndrome such as bloating and constipation. A review of three studies found that people who took guar gum along with a meal had increased feelings of fullness and ate fewer calories from snacking throughout the day.

Overall, Guar gum is a long-chain carbohydrate used to thicken and bind foods. It has been associated with better digestive health, lower levels of blood sugar and cholesterol, as well as increased feelings of fullness.

It’s rich in a type of simple sugar called fructose, which can cause serious health issues when consumed in high amounts.

In particular, high-fructose corn syrup has been linked to weight gain and diabetes.

In one study, 32 people consumed a drink sweetened with either glucose or fructose for 10 weeks.

By the end of the study, the fructose-sweetened beverage caused significant increases in belly fat and blood sugar levels, plus decreased insulin sensitivity compared to the glucose-sweetened beverage.It’s best to skip sugary snacks and foods that contain high-fructose corn syrup.

Instead, go for whole, unprocessed foods without added sugar, and sweeten them up with Stevia, yacon syrup or fresh fruit. High-fructose corn syrup is associated with weight gain, diabetes and inflammation. It’s also high in empty calories and contributes nothing but calories to your diet.

Artificial sweeteners are used in many diet foods and beverages to enhance sweetness while reducing calorie content.

Still, artificial sweeteners are generally considered safe for most people when consumed in moderation.

However, if you experience any negative side effects after using artificial sweeteners, check ingredients labels carefully and limit your intake.

Artificial sweeteners may help promote weight loss and blood sugar control. Certain types may cause mild side effects like headaches, but they are generally considered safe in moderation.

Trans fats are a type of unsaturated fat that have undergone hydrogenation, which increases shelf life and improves the consistency of products. Eating trans fats has been associated with many negative effects on health, including inflammation, heart disease and diabetes. It can be found in many types of processed foods like baked goods, margarine, microwave popcorn and biscuits.

A number of potential health risks have been associated with trans fat intake, and the FDA even recently decided to revoke their GRAS (generally recognized as safe) status, In particular, multiple studies have linked a higher intake of trans fats to a higher risk of heart disease. One study found that eating foods high in trans fats increased several markers of inflammation, which is one of the major risk factors for heart disease.

Research also shows there may be a connection between trans fats and diabetes.

Cutting processed foods out of your diet is the easiest and most effective way to decrease your trans fat intake. You can also make a few simple switches in your diet, like using butter instead of margarine and swapping out vegetable oils for olive oil or coconut oil instead.