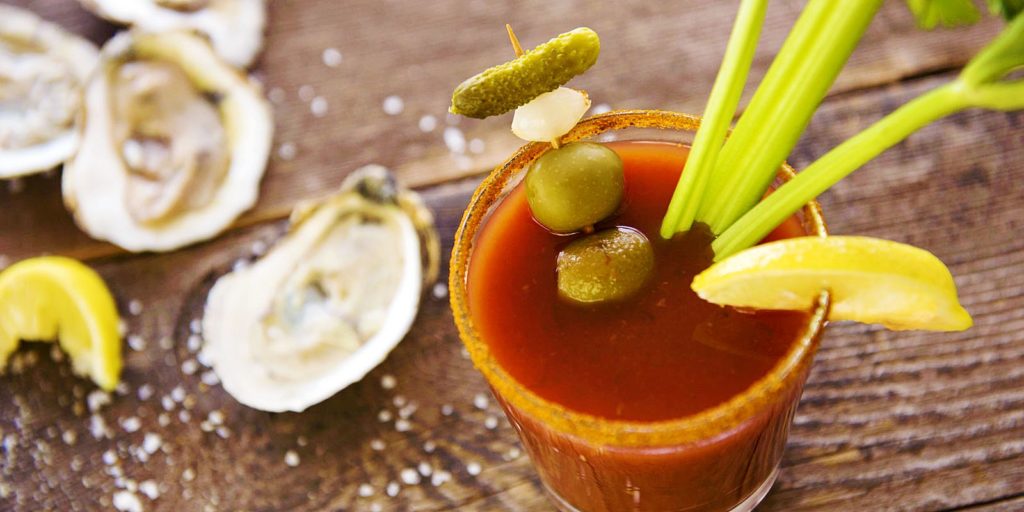 Ah yes, nothing like a well-mixed Bloody Mary. You know, the kind with that gets it just right — rich with flavor and spice but still drinkable and refreshing. She’s great in the afternoon. She’s great at night. Hell, she’s even great in the morning. After-all, who else would you like to go to Sunday brunch with? Even better when she’s bottomless, no?

Sure, we all love her, but do we really know her? Where did she come from? Where did she get her name? And why is she so bloody? Keep reading, to learn the origins of this classic cocktail and then find a recipe for a special Small Axe rendition that gives her a nice Bronx bite.

Who birthed the Bloody Mary?

Fernand Petiot claimed to have invented the Bloody Mary in 1921, well before any of the later claims. He was working at the New York Bar in Paris at the time, which later became Harry’s New York Bar, a frequent Paris hangout for Ernest Hemingway and other American migrants.

Fernand Petiot, the bartender who claimed to have created the Bloody Mary, a popular cocktail drink. Petiot set a record in Paris at a beer-drinking contest on June 15, 1925, when he drank a two-liter glass of beer in 46.5 seconds (approximately equivalent to a 6-pack of 12-oz beers).

The original cocktail is said to have been created on the spur-of-the-moment, according to the bar’s own traditions, consisting only of vodka and tomato juice. Harry’s Bar also claims to have created numerous other classic cocktails, including the White Lady and the Side Car.

New York’s 21 Club has two claims associated with it. One is that it was invented in the 1930s by a bartender named Henry Zbikiewicz, who was charged with mixing Bloody Marys.

Another attributes its invention to the comedian George Jessel, who frequented the 21 Club. In 1939, Lucius Beebe printed in his gossip column This New York one of the earliest U.S. references to this drink, along with the original recipe: “George Jessel’s newest pick-me-up which is receiving attention from the town’s paragraphers is called a Bloody Mary: half tomato juice, half vodka”.

Fernand Petiot later claimed to have invented the modern Bloody Mary in 1934 as a refinement to Jessel’s drink, at the King Cole Room in New York’s St. Regis Hotel, according to the hotel’s own history. When Petiot spoke to The New Yorker magazine in July 1964, he said:

“I initiated the Bloody Mary of today,” he told us. “Jessel said he created it, but it was really nothing but vodka and tomato juice when I took it over. I cover the bottom of the shaker with four large dashes of salt, two dashes of black pepper, two dashes of cayenne pepper, and a layer of Worcestershire sauce; I then add a dash of lemon juice and some cracked ice, put in two ounces of vodka and two ounces of thick tomato juice, shake, strain, and pour. We serve a hundred to a hundred and fifty Bloody Marys a day here in the King Cole Room and in the other restaurants and the banquet rooms.”

The name “Bloody Mary” is associated with a number of historical figures—particularly Queen Mary I of England, who was nicknamed as such in Foxe’s Book of Martyrs for attempting to re-establish the Catholic Church in England—and fictional women from folklore.

According to Fernand Petiot, the first two customers for whom he made the drink “were from Chicago, and they say there is a bar there named the Bucket of Blood. And there is a waitress there everybody calls Bloody Mary. One of the boys said that the drink reminds him of Bloody Mary, and the name stuck.” In the 1930s Petiot tried without success to change the name of the Bloody Mary to the “Red Snapper.”

Some drink aficionados believe the inspiration for the name was Hollywood star Mary Pickford. Others trace the name to a waitress named Mary who worked at a Chicago bar called the Bucket of Blood. The tradition at Harry’s New York Bar in Paris, according to manager Alain Da Silva in a 2011 interview, is that one of the patrons for whom the cocktail was first mixed in 1920 or 1921 declared, “It looks like my girlfriend who I met in a cabaret”; the cabaret’s name was the Bucket of Blood and the girlfriend’s name was Mary, so the patrons and bartender “Pete” Petiot agreed to call it a “Bloody Mary”.

Yet another suggested origin of “Bloody Mary” is that the name in English simply arose from “a failure to pronounce the Slav syllables of a drink called Vladimir”, which gains some credibility from the anecdotal observation that the customer at The New York Bar for whom Fernand Petiot prepared the drink in 1920/21 was Vladimir Smirnov, of the Smirnoff vodka family.

Sure, you’ve had a Bloody Mary before, but have you had one with a blazing Bronx bite? Bartender Bryan Roncancio is back at The Roost working his magic! Watch as he concocts this special Bloody Mary recipe spiced up with Small Axe’s The Bronx Green Hot Sauce!

Oh, and congrats to Bryan on his recent engagement!